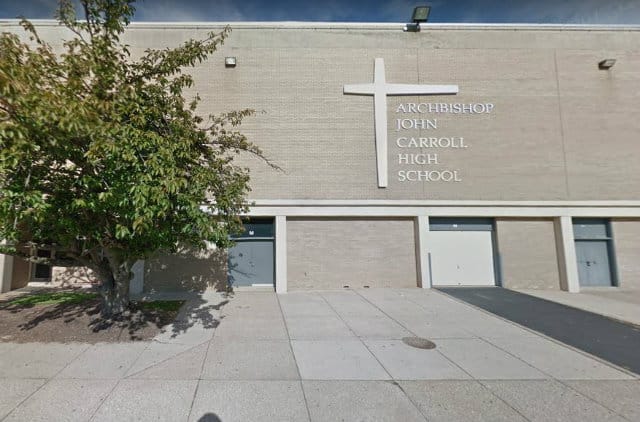 A teacher at Archbishop John Carroll High School in Radnor has been arrested for allegedly having sex with a student and giving her and another student marijuana edibles.

30-year-old Jeremiah Triplett is charged with institutional sexual assault, unlawful contact with a minor, endangering the welfare of a child, corruption of minors, and furnishing alcohol to a minor.

Children and Youth Services contacted Radnor Police on March 26 to report possible child abuse at Archbishop Carroll. According to investigators, Triplett was in a sexual relationship with a student and providing her with marijuana-infused food. The department also received a second report that Triplett had “made out” with another student.

Both girls were interviewed by police and told officers that they regularly had lunch with Triplett in his classroom. They also said that Triplett and the girls used vaping products together and that he provided them with liquor, gummy candies laced with CBD oil, brownies, and other foods laced with marijuana.

Triplett has also been accused of having sex with one of the girls in his office at least once.

Last month, Archbishop Carroll placed Triplett on leave. He had an arraignment scheduled for Wednesday, May 1.

In addition to teaching music at Archbishop Carroll, Triplett was the musical director at St. Katharine of Siena. He was placed on leave from that position as well before Easter.

Attorney contributor and school sexual abuse lawyer Brian Kent, represents survivors of sexual abuse, helping them find justice and holding abusers and their enablers accountable in civil cases. Here are some thoughts from Brian regarding school liability for sexual abuse of students by school employees:

The schools in our communities have a legal responsibility to do all in their power to keep their students safe. Protections against sexual predators are a key aspect of this legal responsibility. Sadly, sexual predators are often found working in our schools and other fields that involve working with kids. When a school employee sexually abuses a student, it’s important both to prosecute the perpetrator and to determine if the school was negligent in a way that enabled the abuse.

There are numerous ways that school negligence can allow sexual abuse to occur. Some common examples include:

In situations involving school negligence, sex abuse victims and their families may be able to find justice by filing a civil lawsuit against the school. This type of legal action can demand accountability from the school and provide the victim with the financial support they need and deserve.